We had to take Slick to the vet yesterday to find out why he was peeing everywhere but the litterbox (this is not usual for him) and why he was drinking so much water (the cats have a 2 quart self-waterer and it would have to be filled every day/day and a half here lately).
When I called the vet, the receptionist said to bring him in to be checked, it sounded like diabetes to her (she had had a diabetic cat). When I told DH that, he said that if Slick was diabetic (at 11 years old), we would probably have him euthanized. NOT something we really wanted to do, but this is a cat that fights oral medications and will run and hide from you when he knows you're going to give them to him (and he's nearly impossible to find, too, even in our small house). Not to mention that we're gone on the weekends when DH isn't working so no one would be here to give him his shots (we don't have anyone who can/will come in and take care of the cats while we're gone, we just leave plenty of food and water and a spare clean litter box for them, it all lasts the 2 1/2 days we're usually gone).
So we took Slick in to the vet, she checked him over, drew his blood, and everything was good except his blood sugar. That was 594, and just like humans, cats should have a blood sugar of 71 to 150. Slick was his usual affectionate self, but he was so passive, laying there on the exam table while the vet explained what would have to be done to get his blood sugar under control (diet, medication, more testing, maybe oral meds later on, different food than what Fat Cat eats). DH said we knew about all of that, since he had type 2 diabetes and we had to go through all of that for him. He told her that with us being gone on weekends, the expense, the fact that Slick won't eat any food but the kind he eats now (DH has tried to change their food in the past, doesn't work, they pick out the new food pieces and leave them, and just eat the old ones when you mix the two together), trying to feed two cats separately when they're used to eating whenever they want to (and have been for the last 10 years), and then fighting to get meds in Slick, it's just not fair to the cat, he doesn't understand that we're doing it for his health, he just knows that we're holding him down and sticking him (or giving him oral meds) and limiting his food and when he can eat.
So DH made the decision to euthanize Slick (and then he had to leave, he couldn't stand to stay and have Slick looking at him with those big green eyes of his). I took care of all the paperwork and wrote the check, but I couldn't stay to be with him as he passed either, I was crying as I filled out everything as it was. I don't know how DH even managed to make the decision, Slick was the cat who greeted him at the door every night when he got home from work, was the cat who laid on his computer desk begging to be petted when DH was playing games on the computer, was the cat who drank his diet Coke, lemonade, or whatever else he happened to be drinking, and was the cat that DH would look at and go "What?" and Slick would make this tiny, almost noiseless meow back at him (and do that as many times as DH would say "What?"). Slick and Fat Cat are what got DH through the times when his ex-wife left him.
We spent a lot of time last night talking about Slick, the good times with him, and how he could be a pain in the ass, and I imagine we'll be talking about him for quite a while, until the pain of losing him finally lessens. 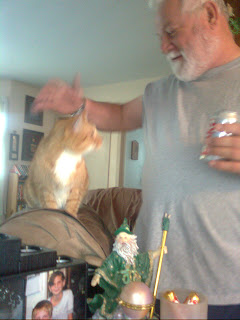 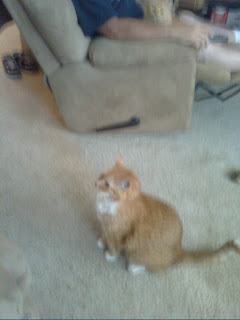