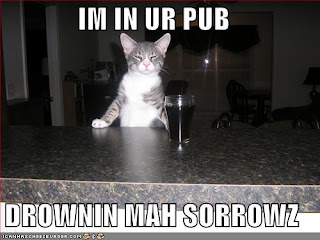 Good thing we don't drink alcohol around our house. DH poured a glass of Diet Coke the other day, and the cat (Slick) jumped up on the counter and started drinking it. Slick also likes lemonade. We've decided that if we want something to drink, it'll have to be in a can or a covered glass/bottle of some kind if we don't want to share it with Slick. He also licks the moisture off the side of cans of soda in the summer time when they first come out of the fridge. Weird cat, he is.

My son's puppy, Max, is hilarious when he's eating Pringles (he likes the dill pickle ones). Put a whole chip on the floor, and he steps on it to break it up into pieces before he eats it. Then he sits down and looks at you, waiting for you to give him another one, which he then steps on, breaks, and eats. If you tell him he's had enough, he will look at you, cock his head, and then you have to tell him again that he's had enough. Then he'll either go lay down or find a toy for you to throw for him. Smart dog, for only 3 1/2 months old.
Posted by vesta44 at 10/25/2008 06:02:00 PM