DH and I took a short vacation to Rapid City, South Dakota the beginning of July to see Mount Rushmore. Neither of us had ever seen it, and we both wanted to, so DH took some time off work, we reserved a motel room for 3 days, and off we went.
We stopped at the Pioneer Auto Museum in Murdo, SD on the way to Rapid City and took a look at some of the old cars there. There were also displays of old toys, tools, smoking pipes, pinball machines, etc. We took a few pictures: 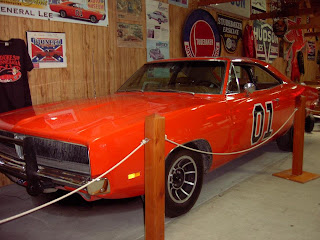 This is the original General Lee from the Dukes of Hazard movie, on loan to the museum (they wrecked 13 of these cars making that movie). 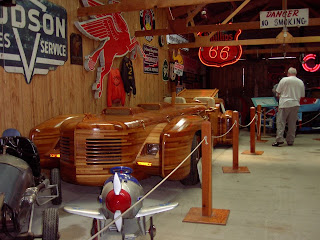 This car is made out of wood and it's absolutely gorgeous - I'd definitely be afraid to ever drive it.

This was on the 4th of July, we had hoped to be able to see the fireworks over Mt Rushmore, but they were cancelled again this year due to the dry conditions and the high risk of fires.
We got up bright and early on the 5th and headed out to see the Crazy Horse Monument. It is going to be huge when it's finished. There's so much to see that you really need to take a whole day just to see that. We did get a few pictures there, and we saw the movie about how the monument came to be - it's very moving, and informative. The monument isn't funded by the government at all, it's strictly donations from the public and admissions that are allowing this monument to be built. 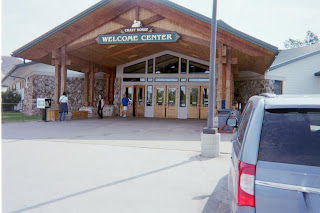 This is the front of the visitor's center, where you can see the film, buy souvenirs, and see all the displays of Native American art and artifacts. We took pictures inside with disposable cameras (the memory card on our digital camera was full) and the lighting wasn't the best, so those pictures didn't turn out the greatest (and when they were developed, they were cropped so that what I saw when I took the picture is not what showed up in the picture - some of the items are only half there :( ). The visitor's center was very handicapped accessible, and they had wheelchairs available for people who have mobility issues. 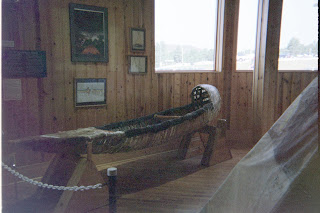 After we left Crazy Horse Monument, we took the scenic route to Mt Rushmore, and it was a gorgeous drive. I wish we had a video camera, I'd have taped that drive for the scenery alone. 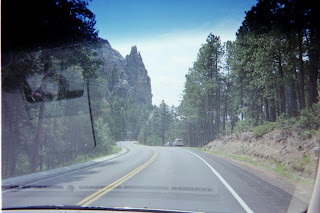 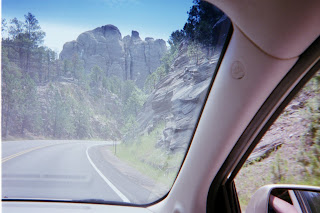 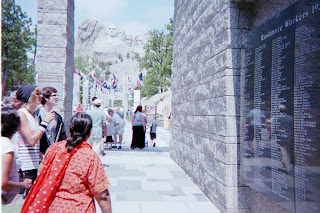 Mt Rushmore was pretty cool, and it was very handicapped accessible - there was an elevator so that if you had to park on the lower levels, you could get up to the level of the monument without having to climb stairs. There was also a ramp for wheelchairs/strollers, but I don't know how easy it would have been to navigate that ramp with a mobility scooter as it curved a couple of times (maybe if you took it slowly).
On the way back to Rapid City from Mt Rushmore, we stopped to go through Bear Country USA. They said at the gate that it takes about an hour and a half to go through the whole park, and at the end there's a building where you can see the bear cubs, and there's a petting zoo, a souvenir shop, and a cafe.
We saw several varieties of deer, mountain goats, bighorn sheep, arctic wolves, cougars, buffalo, and OMG! the bears!!!! Remember in that Yogi Bear cartoon where Yogi is saying he wants to leave Jellystone Park because he's tired of the same old thing every year, the tourists always coming and they always say "Look at the bears, look at the bears, look at the bears."? Well, when we got to the part of Bear Country (at the end) where the bears were, that's exactly what DH and I said: "Look at the bears, look at the bears, look at the bears!" and laughed our asses off. There were so many bears, of all colors and sizes, and they were walking everywhere - in the road, across the road, next to the cars, sniffing the tires, inspecting the vehicles and then just ambling off like they owned the place (they do). 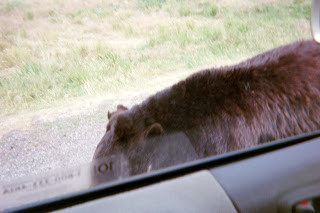 This bear was so close, it was almost rubbing on the side of my van - that's the best pic I could get of it with the window rolled up (don't even think about rolling the windows down in this part of the park). 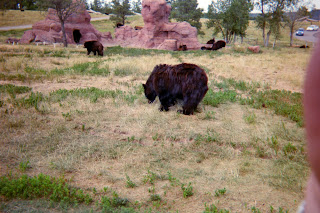 After Bear Country USA, we hit the Reptile Gardens, another interesting stop on the way back to our motel. Not all of those pics turned out as well as I would have liked, but some of them are pretty good. 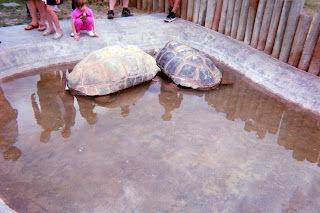 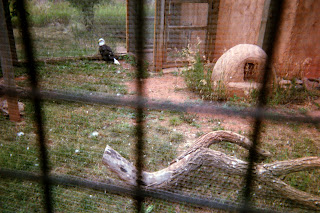 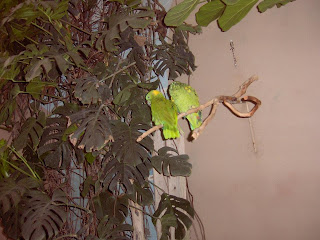 If I had known there were birds not in cages in this section, no way would I have gone in here. I'm fine with birds in cages, but birds flying free in enclosed spaces terrify me (it's a phobia of mine). I managed to walk through the whole area and get pictures, but I was nervous the entire time and couldn't wait to get out of there. Not one of my more enjoyable moments...........


We headed back to the motel room after that to take a break before heading out to find some dinner. Let me tell you, after dinner, I was ready for some TV time - that was one full day and I was exhausted by the time we had seen everything.
On the 6th, we headed out to Wall, SD to see all the sights at Wall Drug. That's another place that you need to take a whole day just to be able to see everything and do it justice. It was interesting, to say the least. 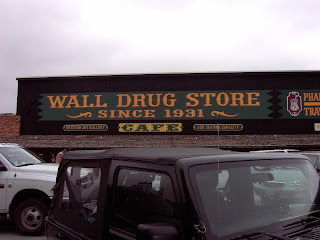 It's really difficult to get a good picture of the front of Wall Drug because of all the cars parked along the street in front of it, but I tried. 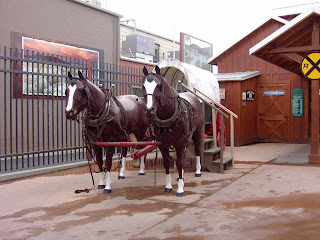 This was outside and back of Wall Drug, you could sit in the wagon and pose for pictures in it (we saw several families do this). 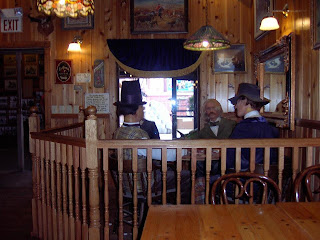 This was next to one of the eateries in the Wall Drug complex - this room was set up to show what an old-time bar looked like, what a poker game looked like, etc. 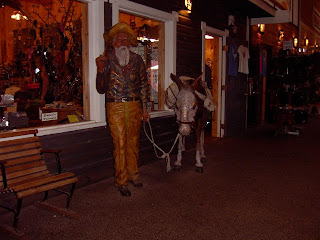 A miner and his pack mule. There were a lot of these kinds of statues all through the place - saloon girl, Annie Oakley, Calamity Jane, Wild Bill Hickock, and other historical figures from the old west.

After we left Wall Drug, we headed off to the SD Air and Space Museum at Ellsworth AFB. That was very interesting, and there was a trip you could pay to take to go through a missile silo (we didn't do that one). I did manage to get pictures of all the planes that were sitting outside, and then I got pictures of most of the items inside the museum. DH told me about some of them, the ones he knew about from when he was in the Navy (like the missiles that were on one of the ships he served on). 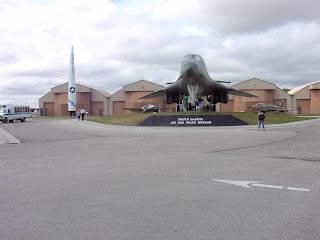 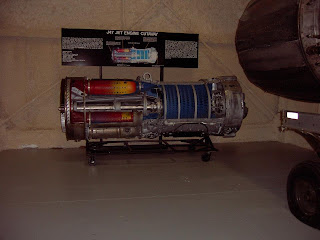 This is a cutaway of a jet engine, interesting to see the inside of it and how it works. 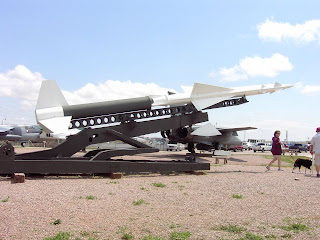 This was a short day, we only saw Wall Drug and the Air & Space Museum before heading back to Rapid City.
We left on the 7th to head for home, and stopped in Mitchell, SD to see the Corn Palace, another interesting place. 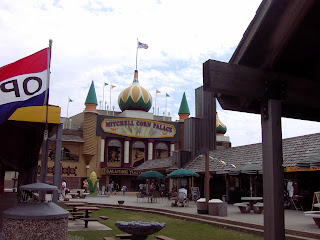 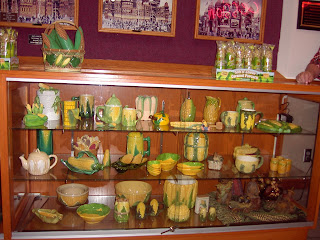 After we left the Corn Palace, we headed over to De Smet, SD to see the Ingalls Homestead, of Little House on the Prairie fame. I wasn't impressed with it - the buildings were all spread out and the only way to see all of them was to pay to take a horse-drawn wagon ride around to them (not handicapped accessible) and it didn't seem to stop at the various buildings so you could get down, go inside and look around and take pictures. It's also a campground, so if you want to get pictures of the covered wagons, you have to settle for getting campers' tents in the pictures with the wagons (not something I really cared to do). 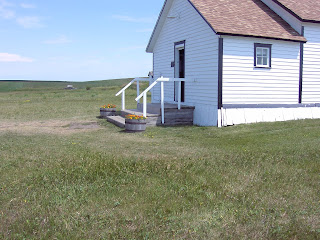 This is the schoolhouse, and we parked to next to it at first because we came in the back way. We then drove up to the visitor's center/souvenir shop to find out about the other buildings and how to see them.

All in all, it was a great vacation, but there was so much we didn't get to see that we wanted to see - we decided we're taking two weeks next year, probably in September, and we're going back to see everything that we missed this time. We'll probably revisit a few places so we can see things that we didn't get to see the first time around too.